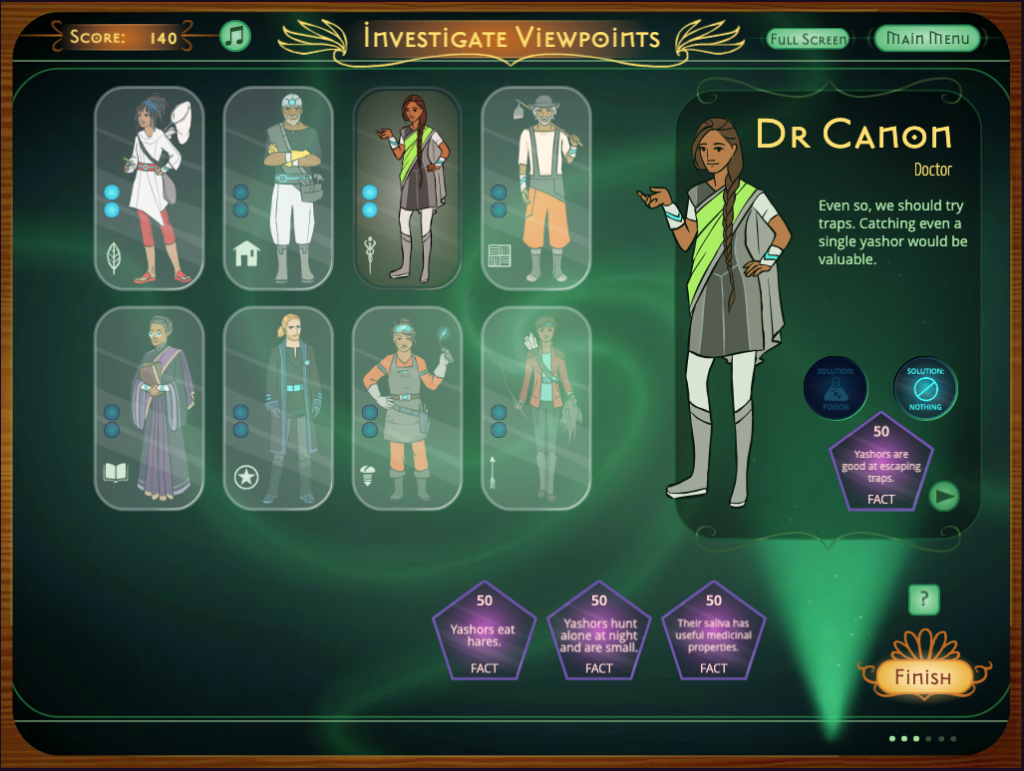 Quandary is an online and mobile game developed by the Institute for Applied Research in Youth Development at Tufts University. Targetted at children aged eight to fourteen, it aims to develop their ethical reasoning by working through the issues and perspectives of a collection of fictional characters facing a series of social dilemmas. As leader of a community, you are weigh the facts and decide on solutions to these problems, while also trying to understand the other colonists’ points of view and sway their opinions with appropriate evidence. It’s free to play and quite entertaining, even for an adult audience.

Before launching into the research around the game, I think it is interesting to discuss the design. I’ve looked around for any reflections by the designer, but unfortunately the available publications only deal with this briefly, so these are my inferences from my own play.

It looks like the design appears to be addressing three basic skills:

The game uses a points system to encourage these skills. There are three stages to each story which each evoke one of these skills. Performing well results in a higher score, but the story seems to continue regardless of how well you do. There don’t appear to be any “correct” solutions to the problems faced in each story, all of them have pros and cons. The emphasis is more on being good at the processes of reasoning and communication.

This is interesting because these kinds of social challenges are typically a weakness for videogames. Without a strong “social simulator” under the hood, it is hard to make NPC conversation systems that meaningfully employ social skills, such as empathy and argument. Traditional dialogue systems short-circuit a lot of the difficulty by offering preprepared things to say, already suited to the context. Other systems eliminate the social component altogether and turn dialogue into a resource system or a pattern-matching game, replacing social skill with abstract mental reasoning.

The gameplay is Quandary is admittedly quite simple, but it doesn’t shirk from the problem. It genuinely requires you to be good at these skills (at a level suitable for the target audience) in order to score well. The second skill test is particularly interesting. You are trying to investigate the viewpoints of each of the colonists and influence their thinking by presenting them with relevant facts. A colonist will make a statement about the solution you will propose, and you can respond with one of the facts you have been given. Choosing a relevant fact gets you points and advances the colonist’s thinking. Choosing an irrelevant fact has no effect, except to reduce the point value of that fact for future use. Scoring well involves providing facts at the appropriate point in the conversation, without devaluing them by irrelevant use. It can be a little difficult to predict at times, but for the most part this mechanic works.

One issue I did find in play was that it wasn’t entirely clear what my goal was in this situation. I felt like I wanted to convince people to support a particular solution that I personally preferred, but the best score could only be achieved by advancing each colonist’s thinking as far as possible, which sometimes means talking someone who supported my preference into not supporting it. Maybe this was the intended design, to encourage considering all sides of a problem, but it felt uncomfortable to me as a player.

What lessons can we learn for the design of other ethically engaging games? I think there is scope for this “bag of facts” investigation model to be implemented more deeply (as other games such as LA Noire have tried to do). The challenge is to reward skilful choice of what to say rather than just spamming all possible options, while also avoiding leading the player too much. Doing this well would not be easy, but it would broaden the scope of ethical play possible within a single-player videogame, such as this.